AS hard as this business is, people are good. I am bringing the store to the Phoenixville Senior Center tomorrow for a benefit crop. No big deal, it's something I do all the time. However, Josh's baseball schedule was released a week ago and yep, you guess it! His first game is tomorrow.

Josh has been waiting a year to play baseball. He announced last June that he wanted to play, but the season here goes from April to June. He had just missed it. I figured he would forget all about it. But ever new session at the YMCA, he would ask, "Is it time for baseball yet?" 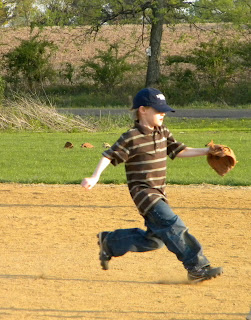 So far, he loves it. He's learning all kinds of things... For instance, he learned yesterday that the first base was called First base, not second. I am, however, still trying to convince him that there are still only 4 bases, not one for each kid on the team. LOL

How cute is he, running with his baseball glove and hat on! I hope he has a fantastic season. Who knows, maybe they will decide to have a base for every player someday.