Life has been so crazy since the story closing this time last year, and frankly, losing my mom at the same time, well, it has taken it's toll.  I lost all interest in scrapbooking and reading and all the other things I love to do.

But as they say time heals wounds and I can feel myself coming back to life slowly, day by day.  I've been doing some projects lately and would love to start sharing again.  First up is a fun Valentine's project. 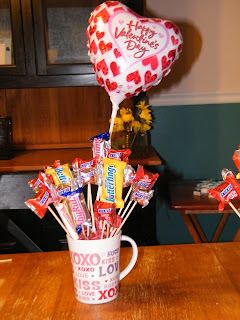 I originally saw one of these at my local grocery store....for $20!  Loved it, but with three kiddos and at home, no way was I shelling out $60. But I thought it really couldn't be that hard to make, right?

So first up was buying some candy - 3 bags which was too much.  One and half was plenty.  ($12)  The original had tootsie rolls in a clear vase.  I opted for Hershey's kisses in pink wrappers.  While at the new dollar store in town looking for vases, I stumbled across these adorable balloons and mugs.  I thought, why have three vases to store, collecting dust when the kids can actually use mugs?  So mugs it was.  ($6 for balloons and mugs) 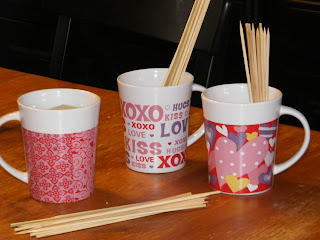 Next, also at the dollar store I bought floral foam.  ($1)  I knew I had a ton of wooden meat skewers at the house already, so I was all set.

Most of the candy, I could just push the wooden skewer through.  Just went right through the wrapper into the chocolate.  But some were too solid, like this butterfingers.  So I had to tape the candy onto the skewer.  Tape wasn't great, so I resorted to a couple of glue dots....perfect!  Two mini dots held up great, although I did put the tape on too. 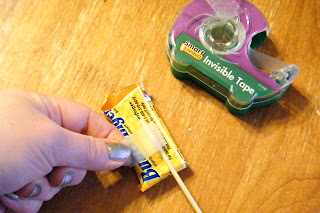 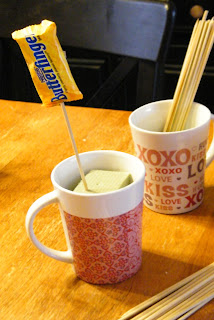 After that, I just added more and more candy, adding more and more pieces.  Since the ballon had a wider stick, I put that in pretty early so I wouldn't run out of space. 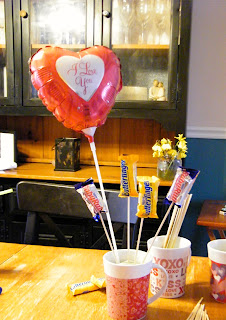 Finally, I was done!  All three bouquets took me less than half and hour, and the cost for all three together, NOT each, was $19.  It would have been less had I not over estimated how much candy I would need.  Major hit in my book, but the best part was  how much the kids loved them.  And like I thought, K has already used her mug to make hot chocolate in - yum! 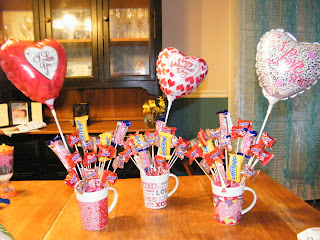 Thanks for reading!  Until next time-